Kratom is the dried and ground leaves of the mitragyna speciosa tree, in the same family as the coffee tree.  Native to southeast Asia, kratom has been used traditionally by the locals to alleviate pain and provide energy to get through a grueling days work. (1)

In addition to action at the μ-opioid receptor, kratom has been shown to have an effect at the α-2-adrenergic receptor, acting opposite it's chemical cousin yohimbine, and blocking the release of adrenaline. These means that kratom has action at the two receptor sites that are currently used to treat opioid dependence via the drugs methedone and lofexidine.  (3) 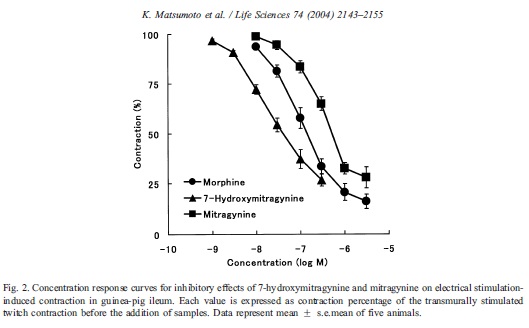 The above graph showing a reduced pain response using 7-hydroxymitragynine as compared with mitragynine and even morphine milligram for milligram in this animal study.

What are the Possible Side Effects?

Kratom is purported to have several adverse side effects.

The most obvious and avoidable adverse side effect is dependence.  Dependence and subsequent withdrawal symptoms have been widely reported with continuous use and/or abuse of kratom.

If you are like me, then you have heard that kratom causes hair loss. For no lack of trying, I didn't come across any evidence of this whatsoever.  Anecdotal reports were inconsistent, with most people (myself included) reporting no noticeable shedding with kratom use.  With this being said, it is not impossible that adding in any sort of chemical compound into your body could cause some hair loss.  Many drugs and other things are known to cause temporary shedding, (6) which is the most likely sort of hair loss that this plant could cause.

While there is a lot of anecdotal data at this point, there is not a ton of conclusive scientific evidence around long-term effects of kratom use.

There is promising evidence to suggest that the compounds found in the kratom plant could become the basis for a new generation of opioid-type drugs that are less addictive and less side-effect ridden. (4)

Many companies purport different psychoactive effects resulting from different strains of kratom.  This is mostly marketing in my opinion.  I have tried many different strains from all sorts of different companies and suppliers, and they all feel basically the same to me.  Of course that is just my opinion and maybe it's wrong.  The Maeng Da strains I've tried seem to be the most potent on a dry plant weight basis, but this too could just be my incorrect human perception.

I am not a doctor, and this article should not be misconstrued to be medical advice.  Please consult your doctor before adding any supplement to your regimen. Above chart is roughly accurate in my opinion.  Chart sourced from kratommate.com

(2) Pharmacologic and clinical assessment of kratom

(3) The Adrenergic a2 Receptor‐Mediated Discriminative‐Stimulus Effects of Mitragynine, the Primary Alkaloid in Kratom (Mitragyna Speciosa) in Rats

(4) Mitragynine/Corynantheidine Pseudoindoxyls As Opioid Analgesics with Mu Agonism and Delta Antagonism, Which Do Not Recruit β-Arrestin-2.

(6) Medications That Can Cause Hair Loss

Please note, comments must be approved before they are published